March 23, 2013 merijnknibbe Leave a comment Go to comments
I was a little fed up with the stories about banksters from Cyprus. How about Deutsche Bank, the largest bank of Europe, darling of the German government and, Lehman style, “Chief Executive Officer Josef Ackermann, who has called proposals to limit bank size “misguided,” will leave behind a balance sheet about 40 percent larger than in 2006, and more than 80 percent as big as Germany’s economy, when he steps down in May. The firm is the second-most leveraged and third-least capitalized of Europe’s 10 largest banks”. A quick google search on ‘Deutsche Bank’ and ‘Fraud’ yielded the next fifteen links:
1. The biggest criminal tax-fraud persecution in history 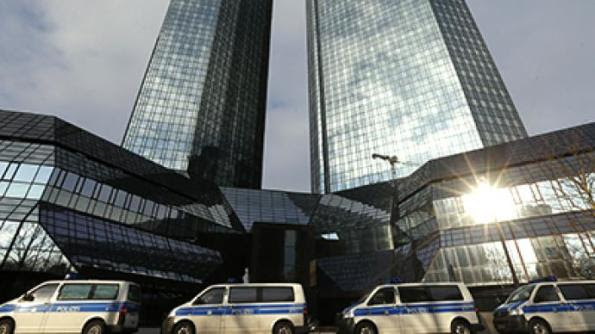 2. Deutsche bank drops unethical traders to restore credibility, the unnamed employees were involved in a lucrative “tax carousel” trading system for carbon emissions credits
3. “Federal authorities say Deutsche Bank has agreed to pay more than $550 million to resolve a federal tax shelter fraud investigation.”
4. Deutsche Bank, JP Morgan, UBS and Depfa Bank Plc were convicted by a Milan judge for their role in overseeing fraud by their bankers in the sale of derivatives to the city of Milan.
5. Welcome to Deutsche Bank Fraud Exposed. Fraudulent foreclosures (and evictions) are known to be rampant around the country.
6.Pakistani family brings fraud case against Deutsche Bank
7. German police raids Deutsche Bank offices in tax fraud probe
8. Whistleblowers alleges massive fraud at Deutsche Bank. “A trio of whistleblowers have come forward to allege that Deutsche Bank perpetrated a $12 billion fraud to hide the true extent of credit derivatives losses.
9. Foreclosure Theft Scam – Deutsche Bank & Morgan Stanley Caught in Hawaii
10. A housing corporation swindel in the Netherlands: The CFO, the broker and the bank: Vestia derivative disaster seems suddenly more than ‘just a case of megalomanic trading’
11. Deutsche Bank Derivative Helped Monte Paschi Mask Losses. “I can’t understand why any financial institution would engage in a trade like this for legitimate objectives,” said Frank Partnoy, a professor of law and finance at the University of San Diego (85090MF) who structured derivatives at Morgan Stanley and has read the files. “They shouldn’t ever be doing that.”
12. India: “It is difficult to imagine an organisation like Deutsche Bank laying themselves open to such frauds, and speaks volumes about the checks and balances being maintained, or lack thereof.”
13. A price winning article (by Jesse Frederik and Eric Smit, Jesse being a irregular contributor to this blog) about a Deutsche Bank derivatives scam which costed a financially once more than solid recycling company 209 millions
14. “Deutsche Bank’s management and supervisory board were discussing provisions of between $300 million (247 million euros) and $1 billion, according to Handelsblatt, which quoted sources in the sector.“
15. Pforzheim, a German city, sues Deutsche Bank because of alleged swindle

The bank that claims to have a Passion to Perform ... more like a Passion to Foreclose and Defraud!  Part of the SCAM OF THE CENTURY! Fraudulent foreclosures (and evictions) are known to be rampant around the country and our government is doing nothing.  OH, LOOK! ROUND-UP TIME AT ONE OF DEUTSCHE BANK'S FORECLOSURE AUCTIONS
QUESTION: Why IS DEUTSCHE MIA in the government's settlement with the banks?  Ask the Deutsche Bank Management Board: Jürgen Fitschen, Anshu Jain, Stefan Krause, Stephan Leithner, Stuart Lewis, Rainer Neske, Henry Ritchotte, (former CEO was Josef Ackermann).  Good luck getting an answer!
Interesting Point:  When you applied for your home loan, you were forced to produce myriad documents, including bank statements, tax returns, W-2s, pay stubs, work and personal references and a ton of money all up front before you could get a mortgage approved and receive the keys to your new home.  But thanks to the big banks and investment firms' obscene fraud, you can lose your home in the blink of an eye.  A mortgage servicing company/bank simply brings a copy of the original mortgage note where you were forced to sign your life away and an Assignment  from one of the pass-through company’s that you’ve never even heard of, record a new deed and your home is gone.

The foreclosure documents, as you may have been heard by now, were not even reviewed in many cases by a human actually reading them.  Robo-signers, they’re called; some signatures were forged; some documents were never properly filed or sealed.
Deutsche Bank Fraud.com is not just another fraud reporting site.  No, we aim to entertain you as you stumble sadly out the door of your treasured home, courtesy of a Deutsche Bank (Douche Bank) foreclosure.